Every day last week, we have been posting little Arctic postcards on Instagram and Twitter, featuring lines from our single Fault Lines, along with an explanation of the lyrics. The idea is bring discussions about rape myths and rape culture to the foreground, while the beautiful scenic images of the Arctic will hopefully alleviate the sombre tone of the topic. This journey has revealed some unexpected sources of inspiration for our song, including Eminem and old legal cases from the 1980s. Here is the series:

This song was inspired by several incidents but these lines in particular were inspired by the story of Rehtaeh Parsons, the teenage girl who was photographed while she was sexually assaulted at a party. She later hung herself. A similar story happened in the Steubenville High School rape case. Much of the discourse around these cases focused on protecting the young accused males, who had promising futures.

In 2013 in Ottawa, university students protested the booking of rapper Rick Ross to perform at their year-end party, arguing that his latest single U.O.E.N.O. promoted date rape. The song goes:

Rick Ross said his song wasn’t about rape, because he never used the word rape.

His show was eventually cancelled.

Day 3: Games to be played

These lines continue to refer to the stories of “good old boys” (junior hockey stars, college football players, sons of respectable professionals) getting involved in sexual assault cases, making problematic people’s notions that the bad guy always looks like a bad guy – a dark figure, lurking in the shadows with a creepy smile.

This is inspired by personal stuff, but the broken legs line was, weirdly enough, was inspired by an excerpt from Dr Dre’s Forgot about Dre featuring Eminem:

I don’t necessarily condone the violence in the song, but I thought the imagery of walking on broken legs to be powerful.

In 2014, the University of Ottawa suspended its hockey team after reports that some of players were involved in a sexual assault of a student during a hockey trip in Thunder Bay, prompting discussions about rape culture on campus and why these harmful behaviors seem like a game to some people. 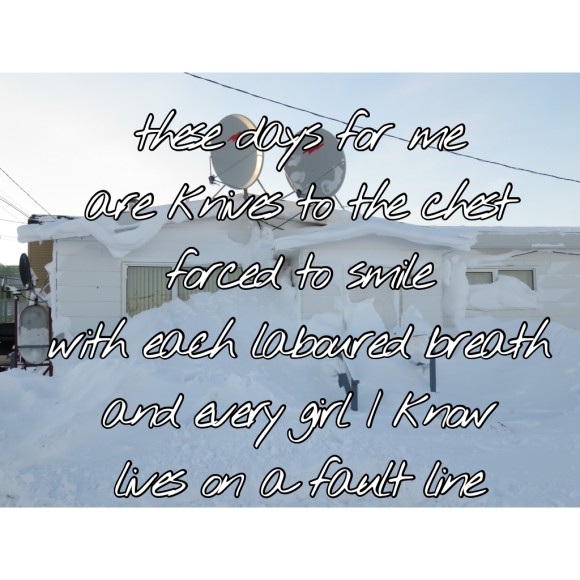 Is it harmless to tell a woman you are passing on the street to smile? A lot of people see how it could be street harassment. But if you don’t know her, you have no idea what she has been going through. You don’t whether she feels like she has something to smile for. Why should she smile for you? Is the purpose of her existence to entertain you? Stop telling me to smile.

I read an article somewhere talking about however how every woman lives on a fault line because they are always at risk of sexual violence. Has anyone seen this article? I can’t find it again. I found it to be such a powerful line.

In 1986, a woman who is known to the public as Jane Doe was raped at knife point in her own Toronto apartment. She sued the Metropolitan Toronto Commissioners of Police for failing to protect her, as it was discovered that the police was aware of a serial rapist but did not warn the women at risk because they wanted to catch him in the act. Jane Doe v. Metropolitan Toronto Commissioners of Police became an important legal case where the judge found that the police owed her a duty of care, which they failed, and also found that the police did not take the crime of sexual assault seriously, as they were motivated by rape myths and sexist stereotypes about women.

I would love to have the strength and courage of Jane Doe, who fought for her rights under the harsh critical public eye. I have so much admiration for the women who fight these terrible injustices every day, despite the terrible things that had happened to them.

Emma Sulkowicz was raped in her dorm room, and when her complaint was dismissed by the university, she decided that her thesis project would be a performance art piece called Mattress Performance (Carry That Weight), where she would carry the mattress where she was raped on her back, as a powerfully symbolic gesture on campus until her rapist is expelled.
I find her willingness to be so open about her personal experience to be courageous, and her ability to keep on living, thriving, and making art to be so admirable and inspiring.

I wanted my song to end on a hopeful note, one of strength and determination to survive. What has been done to you does not define everything that you are. You are so much more than a victim. You have so much to live for.
Also, you are not alone.

In other news, we made it to the national round for CBC Music’s Searchlight contest for Canada’s Next Best Artist! We are so thrilled to be representing Nunavut against bands from across the country. There are only 23 bands left, and next week there will be only 10. Don’t forget to keep voting for us!

A huge thanks to the ladies at Iqaluit-based Finding True North for interviewing us and the other regional finalists for CBC Music’s Searchlight contest for Canada’s Best New Artist. You can read about it here

Heartfelt thanks as well to one of our favourite radio shows Ladies First from CHUO FM for playing our music, and especially for this kind comment that radio host Lina had to say about us:

Searchlight Round 3 and more radio love

We made it to Round 3 of CBC Music’s Searchlight contest for Canada’s Best New Artist! That means we’re in the top five of our region, Nunavut. Thanks to everyone who has been supporting us! Don’t forget to keep voting for our song Fault Lines.

We’ve been getting so much love from radio and web lately! In a recent article, CBC Music producers recommended that if people liked Grimes, they should check out our music. What an honour to be compared to such a creative, independently-spirited, talented & super smart musician! Check out CBC Music’s other music recommendations here.

Grant Lawrence also highlighted us as one of his music picks in his Searchlight Round 2 stand-outs. He wrote:

This amazing electro-pop duo from Cambridge Bay, Nunavut, made it all the way to the National Top Ten of Searchlight 2014, so it’s great to see them back, and with another melodic, hypnotic beauty of a song. And I love the irony that one of Searchlight’s hottest bands for two years in a row comes from the coldest place.

Big thanks to other musicians who have been supporting our music with their kind words on Facebook as well, including Aidan Mayes and Mandy Cole, Girl Meets Bear, and Grace Hrabi. We’re sad they didn’t make it further in Searchlight, but we’re happy to have had a chance to meet them! Please check out these fabulous musicians for a chance to discover cool new music!

A special thanks to SHATTERJAPAN for helping us spread the word about our Fault Lines Project.

In non-Searchlight news, one of our favourite radio stations CHUO FM is currently doing their annual funding drive.  Please make a donation to this wonderful community radio station which has been supporting our music (and other independent musicians) way before any other station did. They have great programming, including No Filter, Ladies First, the Third Wave, and Apt613 Live. You can donate here. In particular, thanks, Ming, for playing our song Fault Lines on No Filter (you can listen to the archived show here if you missed it the first time). The radio show Ladies First will also be playing our music, so make sure you tune into CHUO FM on Thursday!

Don’t forget to keep voting for us for Searchlight and send in your #EndVAW selfies for our Fault Lines music video!

This gal’s excited to make it to Round 2! (Christine)

We made it to round 2 of CBC Music’s Searchlight contest for Canada’s Best New Artist! Thanks to everyone who has been supporting us! We have met so many great folks through this contest – it’s been so much fun. Please keep voting for us every day!

We’ve mentioned before that Searchlight has been a fun way to discover new music. We compiled our own #Searchlight playlist of electro music:

Check out the playlist here!

Most importantly however, we’ve been busy working with Mailyne Briggs to make a music video for our song Fault Lines. We want photos of you holding signs that say “End violence against women” to use in the music video. Send them in! More details here.

The Vienna-based arts collective site What If recently published our response to their call for submissions on what gets our creativity going. Our submission was a series of Arctic postcards that we created, explaining how we get inspiration for our music. You should check it out here, along with the other fascinating responses.

We are looking for people to send us selfies of them holding signs that say “End Violence Against Women”. We’ll be including these selfies in our music video for Fault Lines. If you want to take part, check out the details here

CBC Music’s Searchlight contest for Canada’s Best New Artist is such a great way to discover new music and especially for musicians to discover each other. We’ve been fortunate enough to have our Searchlight song included in a few lists of favourite picks, including:

A big thanks to CBC producer Mike Miner for the shout out on CBC Radio Noon in Montreal. We’re also honoured to be part of the original Searchlight Mixtape again this year, which you should definitely check out here: http://www.thepredatorprey.com/searchlight-mixtapes

Thanks, everyone for your support! And don’t forget to keep voting for our song every day!