NEW ANNOUNCEMENT: We are collaborating with the talented visual artist Mailyne Briggs of Dream Love Grow to create a music video for our song Fault Lines. Part of this music video will feature selfies taken by women everywhere of themselves holding a sign that says “End Violence Against Women”. We’ll also be posting these selfies on the Fault Lines Project website.

We want your help! Send us your #EndVAW #ProjectFaultLine selfies (instructions here) to post online and include in the music video, and help us spread the word! And make sure you check out the Fault Lines Project website: http://faultlinesproject.tumblr.com/. 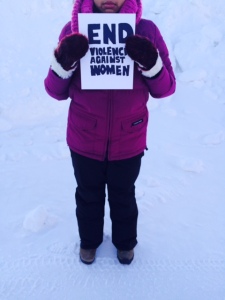 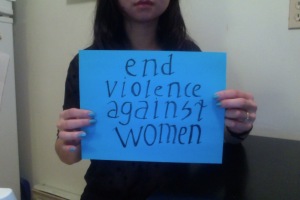 Also, a big thanks to Meter Bridge for naming us as one of their new band recommendations in their interview with The Blog that Celebrates Itself.

selling band merch (with kimchi and sushi) at the community market

Well, it’s been quite the adventure for us, trying to return to Cambridge Bay after the holidays, especially with the blizzard that continued for the week! Christine ended up having some extra time to shop in Edmonton, while Gloria took the time in Yellowknife to perform a short acoustic set at the Cellar Bar & Grill. A big thanks to Mel Leonard for hosting the event! 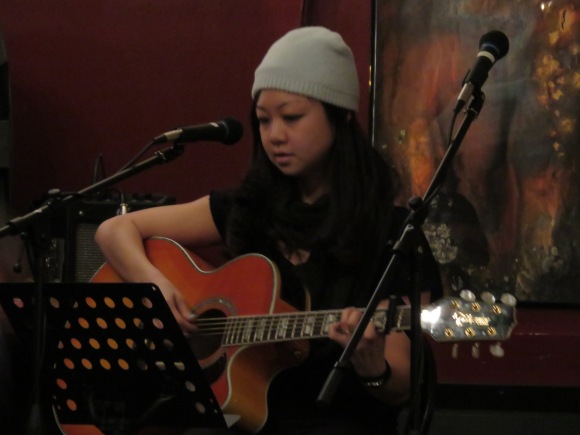 The magazine Above & Beyond published a lovely review of our album the Longest Night. Thanks so much for your kind words! You can read it here on page 49. 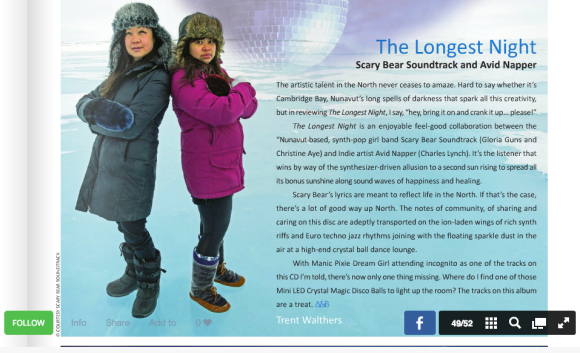 Also, a warm thanks to Simon Edwards for playing our music on his radio show Loose Canon on British community radio station 6 Towns Radio from Stoke-on-Trent in Staffordshire . We are loving the love we’ve been getting from our British friends! If you missed it when it first aired, you can listen to the mixcloud stream here.

Stay tuned for more news soon about our new music video project we’re working on. We may ask for your help!

It seems our music has been included in a lot of people’s music lists in time for the year’s end. A huge thanks to Julie Lalonde from CHUO FM radio show The Third Wave for including our new album in her list of top 5 albums of 2014! Lenny Wu of Wildworks also included our album in his list of 2014 music picks. If you want to see what songs made Gloria’s year, you can read about her own list here.

In addition, the music video for our old song Asian Fetishist was featured by the participatory arts project What If? in their discussion about identity – have a read!

We look forward to what this new year will bring us. It’ll be a busy one for sure, with new show announcements coming very soon. We’ll also be working on new songs for a new album, some exciting collaborations, and even a music video!  We can’t wait to share it all with you. 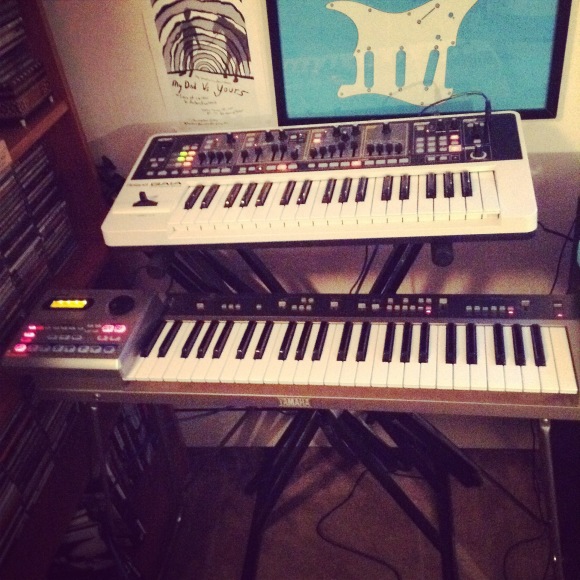